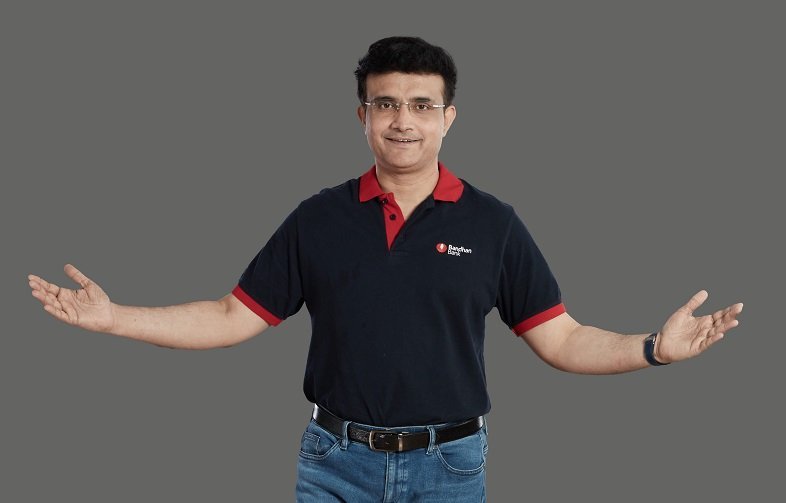 Mumbai, January 03, 2023: Bandhan Bank, one of the fastest-growing banks in the country, today launched its integrated marketing campaign featuring the Bank’s brand ambassador, cricketing legend, Sourav Ganguly. The ‘Jahaan Bandhan, Wahaan Trust’ campaign emphasises the ‘trust’ that the brand has been able to earn in a span of seven years as a Bank and over the last two decades in the various avatars prior to the Bank.

The campaign uses the analogy of Ganguly’s career, who became the Bank’s customer soon after the Bank was launched seven years ago, to showcase the trust of customers and stakeholders that the brand has been able to achieve. In the film, Ganguly is seen reminiscing about the days when he wasn’t a star and there were only a few spectators on the ground. As he worked harder, started scoring runs, and established himself as a dependable member of the team, he gained the trust of millions and that brought more people to the stands. Exactly, in the same manner, Bandhan started small as an NGO. As it started expanding and its work received recognition from stakeholders, Bandhan Bank gained the trust of the people.

Speaking about the new ‘Jahaan Bandhan, Wahaan Trust’ campaign, Apurva Sircar, Head – Of marketing, at Bandhan Bank, said, “Bandhan Bank, in the last seven years, has established its presence in 34 states and union territories, has more than 2.77 crore customers and its book size is nearly Rs.2 lakh crore. This has been possible due to the trust of stakeholders that the Bank has been able to secure. Dada’s (Ganguly’s) life has been witnessed by one and all. While both Dada and Bandhan have origins in West Bengal, both have not let that define them and have established themselves as trusted names across the country and the world, thereby winning the trust of millions. Our campaign draws inspiration from this similar journey of both brands.”

Interestingly, this is the first time that Bandhan Bank has appointed a pan-India brand ambassador.

Speaking on the association, cricketing legend and brand ambassador, of Bandhan Bank, Sourav Ganguly, said, “I have closely watched Bandhan grow into the bank it is today. I have been an admirer of its journey and the opportunity to help amplify the Bank’s message is nothing short of a privilege. Trust is the cornerstone of every relationship and during my captaincy, this value was the most important. We trusted each other in the team and that made us a winning unit. For a bank, trust is imperative and I am glad that Bandhan Bank has been able to gain the trust of crores of people in such a short span. I have been a Bandhan Bank customer for a few years now and I look forward to my continued association with them.”

The ‘Jahaan Bandhan, Wahaan Trust’ campaign was conceived by Leo Burnett Orchard, who was brought in as Bandhan Bank’s creative agency in August 2022. The film and stills were shot by Prodigious. Speaking on the campaign, Pravin Sutar, Head of Creative – Leo Burnett Orchard, said, “There are very few purpose-driven brands across the world and to get to work on them is a privilege. Bandhan Bank’s journey has been exemplary and it needed stand-out storytelling. With Sourav Ganguly, we got the opportunity to create a campaign that seamlessly connects the story of Bandhan Bank and Dada, promising to strike a chord with everyone. We are confident that this piece of work will be memorable and will drive impact for Bandhan Bank.”