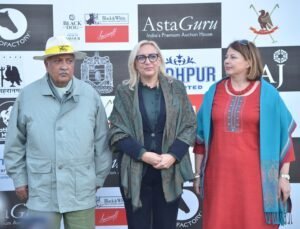 Jodhpur Polo and the Equestrian Institute hosted a 4-week long annual Polo Season in December Jodhpur and Polo have always shared a special bond. And with

the winter season here, the Blue City and its Royalty came together to form a one-of-a-kind festival. In keeping with its age-old tradition and legacy, the city of Jodhpur hosted the 23rd

Annual Polo Fiesta at the Maharaja Gaj Singh Sports Foundation Polo Ground, Air Force Road, in Jodhpur. Held from 6th December to 31st December 2022, the season, organized by Jodhpur Polo and Equestrian Institute (JPEI), witnessed four(4) IPA tournaments and eight(8) one-day exhibition games. The chief guests for the event were Her Excellency Eleonora Dimitrova – Ambassador of Bulgaria, Her Excellency Katrin Kivi – Ambassador of Estonia, and His Highness – Maharaja Gaj Singh II – head of the royal family of Jodhpur and the founding patron and ambassador of JPEI who awarded the trophies to the winners. Notable figures who were present at the event include Meenakshi Lekhi – Minister of State for External Affairs and Culture of India,

The final match of the Hermes cup was concluded with a farewell event consisting of high tea, musical performances, the launch of the book launch vintage car rally. Celebrating the end of a wonderful polo season after two years of the pandemic, H.H Maharaja Gajsingh II said, “Jodhpur is the Alma Mater of modern Polo in India; it is home to legends both past and in the making. The Season this year marked added joy after the Pandemic.” He added It (the Polo Fiesta) is not just an instrument to promote tourism in Jodhpur; it is the friendliness of this place that makes it different from other polo destinations