Chingari powered by GARI, is confident about Web3 being the game changer in 2023

INDIA, 5th Jan 2022: Looking back on 2022, Chingari powered by GARI, the world’s fastest growing on-chain social app, seemed to be on a rollercoaster ride. It was also a memorable year for content creators and social media users because it enabled them to monetize their content and time spent on Chingari.

Chingari led the year allowing content creators to monetize their content on the platform. Chingari successfully integrated its Social Token- GARI on the platform in June 2022, enabling a new creator on the app to immediately begin earning on the app through the create2earn module under its GARI Mining Programme. GARI Token has received great enthusiasm from the community with almost 1.5 million GARI holders in a record time of just 8 months from launch. Chingari aims for active wallet users to reach 2 million by 2023. 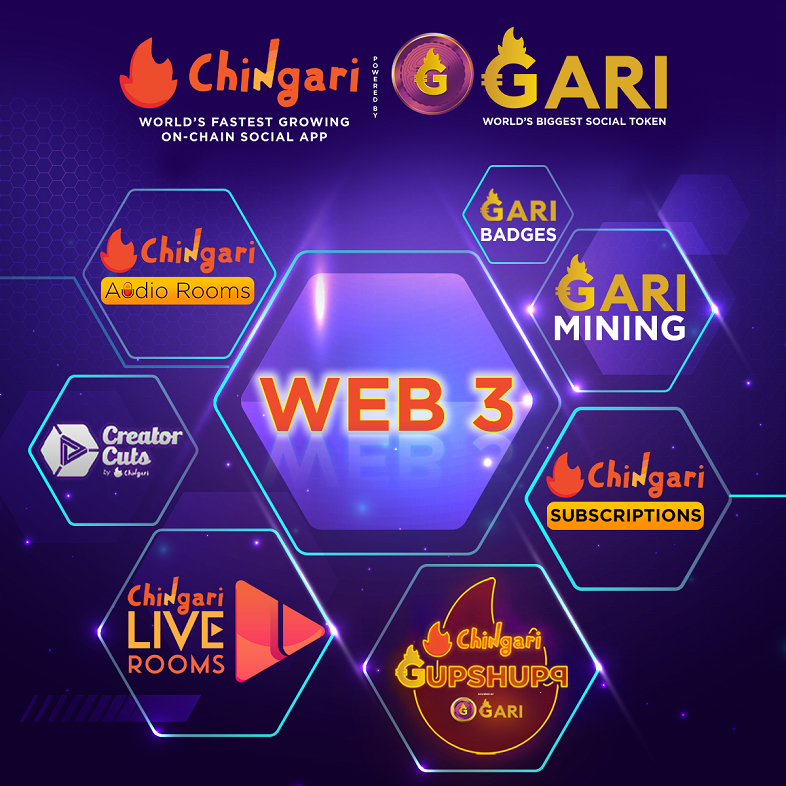 While the GARI Mining programme was only the beginning of allowing social media users and creators to monetize their content and time spent on the app, Chingari went on to introduce its feature Chingari Audio rooms, which allowed creators to connect with their app followers in real time. The success of audio rooms spoke volumes, as monthly user activity on audio rooms exceeded 15 million minutes within months of its launch, with participation from 100+ countries worldwide. This was followed by the launch of the first video NFT Marketplace- Creator Cuts in August. A platform where creators can mint and sell their best content, while users can bid and buy vNFTs, bet on creators, and get 10% share of the creator’s future earnings.

Chingari expanded globally in 2022, entering new markets such as Indonesia, the United States, and the United Arab Emirates, with plans to launch in Latin America, Africa, and Europe in 2023. Chingari also introduced new features such as Chingari LIVE and GARI Staking, as well as original IPs such as Chingari Gupshupp, which enhanced the entertainment quotient for Chingari users. And the most recent monetization plan launched by Chingari for its users, was Chingari Subscriptions. Under this initiative, Chingari is offering three subscription plans on a daily, weekly, and monthly basis, allowing users and creators to double their earnings from the GARI Mining programme and allow a complete withdrawal during the active subscription period. This latest campaign was a huge success, with the app acquiring over 1k subscribers for this plan in less than a month of introducing Chingari Subscriptions.

“2022 has been a great year for us at Chingari powered by GARI, with many milestones achieved and so many yet to achieve,” said Mr. Sumit Ghosh, Co-founder and CEO, Chingari. “For us, the year 2023 will be all about broadening our horizons and dominating the use of Web3 in our newest features and products. All of our innovations will take the form of Web3 products, which will facilitate us in heralding the long-awaited revolution in the creator’s economy. We envisage exciting times ahead!”, he expressed further.

Team Chingari is set to focus on and build newer verticals such as live e-commerce, Web3 ads, and an earn & learn module in 2023, making it an exciting year for the industry and content creators worldwide.

The app’s eclectic platform entertains more than 170 million users across, and witnesses videos in over 15 languages. It was one of the top 20 most downloaded apps on Google Play in 2022, and over 200 million videos are being watched on the app on a daily basis.