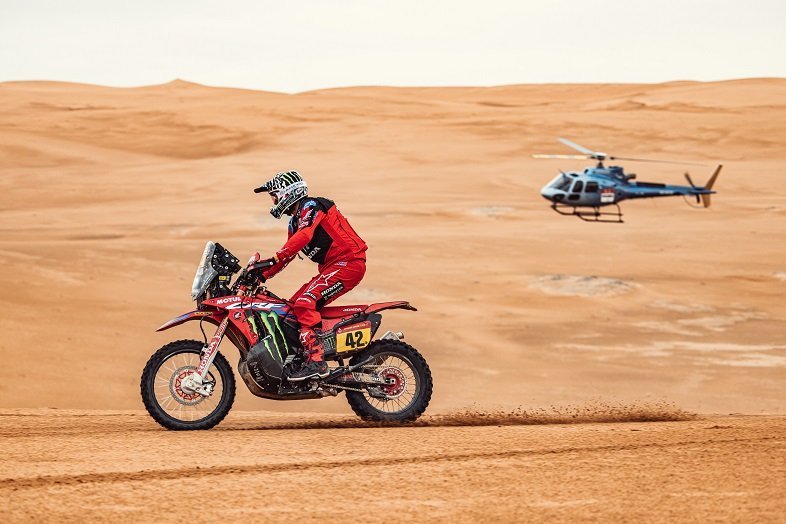 Saudi Arabia, January 09, 2023: It was another long day at the Dakar Rally, with a total of 821 kilometers to complete between Al Duwadimi and Riyadh. Even so, the special section was reduced to a length of 345 kilometers starting around valleys in the heart of the mountains before tackling again the wide open desert and the fast tracks.

After one week of racing and eight stages (one canceled) all contenders in the top positions are incredibly close to each other. Monster Energy Honda Team is playing its role in reaching this point with a solid performance from all riders. Today Chilean Pablo Quintanilla was once again the fastest one in fourth position, followed by Frenchman Adrian Van Beveren (5th) and Chilean Jose Ignacio Cornejo (12th). In the overall standings, Quintanilla is ranked 5th with a gap of just 2:45 minutes to the leader, Van Beveren is in 6th position (2:49 minutes gap to the leader), and Nacho Cornejo ninth (19:32 minutes gap to the leader).

Tomorrow is time for the well-deserved rest day at the Dakar Rally – it will be spent in Saudi Arabia’s capital Riyadh – so all riders will be transferred to a hotel and be able to recover their energy for another week of action. In the meantime, mechanics and engineers from the team will work hard to revise the Honda CRF 450 Rally in every detail – starting with a wash and continuing with the check of each component.

“Time really flies and we have completed the first part of this Dakar Rally. It has been a long and hard week for all, starting with the abandonment of Ricky Brabec after a crash. So we kept fighting day by day and our three riders are doing a great job. I have to say that the competition level is really high. All contenders are very close, so I think we are in a good position to start another week and pursue our goal to move into the top standings. Our strategy hasn’t changed so let’s continue to be solid and consistent in a terrain where we know we have the best skills to succeed.”

“We have reached the rest day after another long stage. I felt good along the way and managed to ride at a good speed and rhythm. Conditions were really hard with the cold weather and the long mileage of the stages making its effect on our fatigue. I think now we are in a good position for the second week of the rally. It is a fact that our category has evolved a lot and the rhythm is impressive but I feel strong and determined to push even harder in the days to come and attack.”

“This was another good stage. I decided to attack from the start because I knew it was a good moment to recover some time. It was not easy, especially in the first part where there were a lot of stones. Then we moved to faster tracks and I continued at a great pace. The outcome is good and now I am looking forward to the start of the last week of this Dakar Rally. If I could, I would skip the rest day and start tomorrow instead!”

“So we have concluded stage 8, which was a mixed stage with many different kinds of terrain. I felt good in my Honda CRF 450 Rally and overall It was a good day. Now that we have reached the rest day it is time to recharge our batteries and get ready for another decisive week. I have some delay but I believe there is still a lot to happen in this Dakar and continue to focus on climbing to the top standings.” 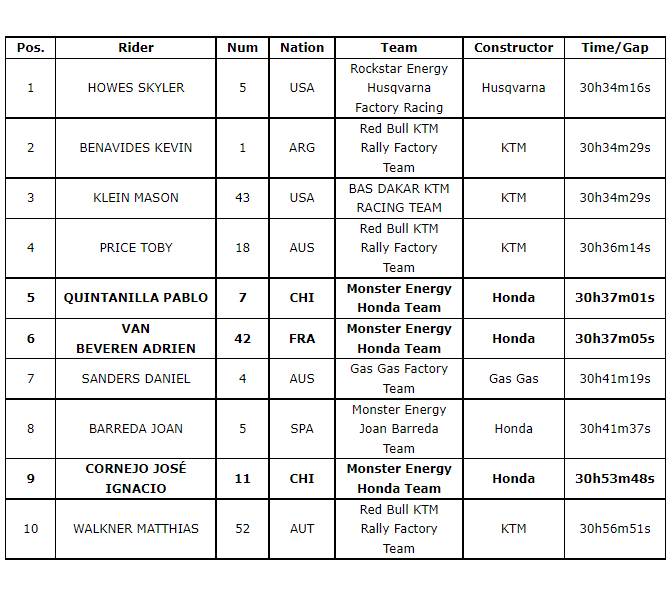