Kriti Nagar, the director, producer, and writer of the short film Behrupiya has received an extravagant best Debut Director award from non-other than JD Chakravarthy, renowned actor of the film Satya at the Golden Jury Film Festival 2022 held in Mumbai. Golden Jury Film Festival is an International film festival designed in Mumbai to bring together all filmmakers from around the globe. Actors JD Chakravarthy, Piyush Mishra, Jameel Khan, Anshuman Jha, Barkha Bisht, Ashwin Kaushal, Milind Joshi, Mukesh Bhatt, and others have graced the 4th edition of Golden Jury Film Festival, founded by director Pragyesh Singh, which happened on 14th and 15th of December in Mumbai. The film festival was directed by Subranshu Das and organized by Kritika Chauhan respectively. 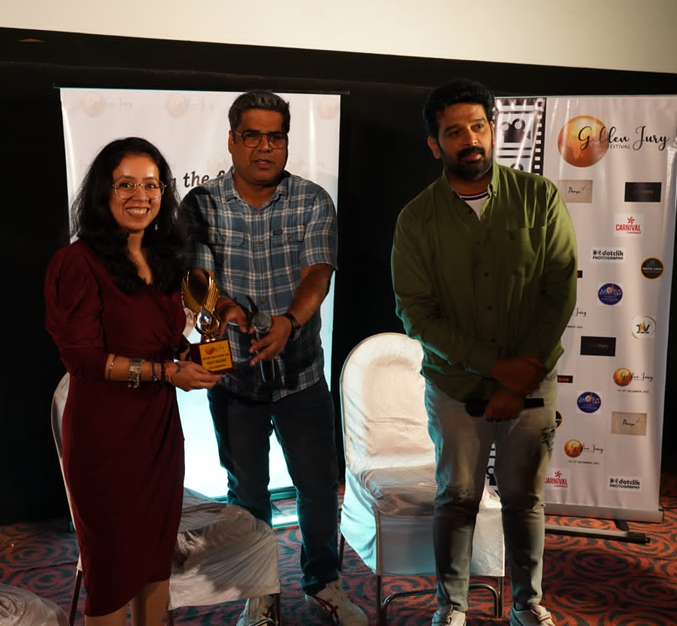 This film is about multi-faced people who always have an alternate motive. The key protagonist, Behrupiya, is fed-up with contract killings. He is having a mental breakdown after killing one of the brothel owners. He knows he did a horrible thing- which can’t be redeemed, but he got orders from his boss. We can see the transformation of Behrupiya from going through a mental breakdown to getting a hold of his own life. All he needed is mental peace in a place known for prostitution and contract killing.

The contribution of the stars of this short film is worth mentioning, as they have worked day and night to make this ambitious film even grander. The Director of Photography, Kamal Singh, has made each frame of this film so beautiful. The stars of the film Ankit Hans, Varun Suri, Ram Chawla, Nirvaan Arora, and Shabnam Chauhan along with the rest of the artists in this film have given their best performances to make this film worth remembering. One of the best parts of this film would also be the quirky dialogue and the voice by Manjeet Singh, which has made the audience giggle and engaged throughout the screening.

Commenting on the Best Debut Director award, Kriti Nagar, New Delhi-based Writer and Film Director of Kalakriti Films Production said, “I have started my film production company Kalakriti Films from the scratch and I am so honoured to be awarded as the best Debut Director by JD Chakravarthy renowned actor of Satya for my short film Behrupiya. I am grateful to the jury members and organizers for producing such a memorable event. I and my team at Kalakriti Films will surely come up with some more great projects in the future and will continue to contribute towards upholding the legacy of Indian Cinema.”

Kriti Nagar founded Kalakriti Films Production, with the sole purpose of making films and web series that can make our society a better place to live. The quality of films and web-series are deteriorating with weak storylines, bad re-makes and exaggerations which don’t even support the story’s demand. Also, these days, new talents are not included in the film fraternity, and many times they have been discouraged- even when these “legit outsiders” are far more talented and hardworking.

Therefore, She believes that it’s the need of the hour to step up and collaborate with real talent, in order to uphold the rich legacy of our Bollywood Industry.