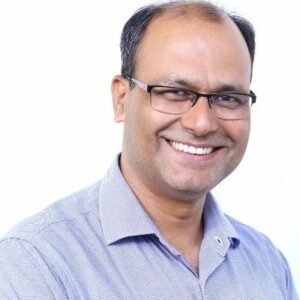 At the age of 21, Birbal, who otherwise may have gone for any administrative jobs, came up with the start-up of his social venture- British Lingua which has been able to fairly sharpen the skills and improve the lifestyles of millions of students who were initially deprived of English education and employability skills.

The man now synonymous with English training is no other than Dr Birbal Jha, who evolved and expounded a unique Structural-cum-Interactive Method for a quick and easy grasp of the English language, which has been endorsed by various international schools of thought on the subject.

With a mission of helping people avail themselves of the advantages of English skills, he coined the slogan English for all for the social venture in 1993 for effecting societal change in which he succeeded greatly.

He was born to Smt Jaipura Jha and Sri Dayanand Jha on 22 Oct 1972, at the riverine village Sijoul falling in Madhubani, a district of Bihar. Continuously, he lived 16 years of his formative life there. The village under the Andhra Tharhi block is around 20 km away from the district town.

He is a Ph D and holds 2 Masters’ from Patna University where his name figures in the category of notable alumni. However, he received early and secondary education in the village. He did his matriculation from Bihar School Examination Board in 1988.

He is an acclaimed author having penned over 30 books to date on aspects of Self-help improvements, English communication skills, personal growth, instructions, parenting and culture. Remarkably, he received a lot of acclaim for his weekly columns ‘Seekhen Sahi Angreji’ in Dainik Jagran and ‘Jano English’ in Hindustan, both national dailies. With Oxford University Professor Elizabeth Schoel besides many others highly appreciating Dr Jha’s magnum opus- Celebrate Your Life, he is an institution in himself considering his erudition and prolific works.

In 2013, putting a spotlight on the need for English education, he wrote a drama, namely ‘Englishiya Boli’. Moreover, as a poet, he has composed poems in three languages- English, Hindi and Maithili. He has also composed lyrics for several songs which have views in millions on youtube.

In the 2010 Commonwealth Games held in Delhi, he headed the training team of British Lingua which imparted the first-ever training in Spoken English and Behavior Skills to those who were the first points of contact in the event.

Recognizing his expertise and scholarship, the Government of Bihar entrusted him with implementing the first-ever ‘Spoken English and Capacity Building’ training project for Government High School-teachers in 2009, and its successful completion has set the benchmark for English education in the state.

Furthermore, in collaboration with the Government, his social enterprise has been able to bring about noticeable changes to the lives of thousands of Mahadalit, the poorest of the poor in the state.

Dr Jha’s continued research has become one of his greatest assets; it has a clear correlation with his teaching methods and reflects the needs of the people in contemporary society.

What could be more satisfying for him than the recognition of his work? A postal stamp was issued on Mithila Paag in 2017 following the ‘Save the Paag Campaign’ launched by Mithilalok Foundation which he heads as Chairman. This campaign was his brainchild. He was a campaigner in the movement comprising a lot of intellectuals from the region.

As a mass communicator, he was able to connect the masses in the belt. Since then he is regarded as Paagman of India, an award bestowed upon him in recognition of promoting Indian culture and values. He is a part and parcel of many social outfits.

In recognition of his social, cultural and literary works Dr Jha has been bestowed several awards and citations matching his towering personality. He holds the view of an egalitarian society where everybody should get an opportunity of living a decent life. He is a social worker in every true sense of the word. His learning and sharing with others is on with his intention of taking English to the common in India.

Dr Jha’s personality and inspirational teaching have won him acclaim as well as the hearts and minds of many thousands of trainees along with recognition throughout India.

As a child activist, Dr Jha has launched campaigns for the safety, security and well-being of children. In this regard, his songs are so heart-touching, moving and emotive that all and sundry get riveted. Also, he has written a book titled ‘Child Safety’. His writings and works are reflective of his being a prolific writer.

He has been able to compose wide-ranging lyrics for dozens of songs as a non-professional person or amateur. One of them is Kya Gunah Tha Mere Bache Ka which is uploaded on youtube having views of more than 8 million to date.

His writings and participation in the ethical movement that seeks to improve and protect the quality of the natural environment give a clear impression of an environmentalist. It won’t be an exaggeration to call him a culturist for his keen interest in diverse aspects of arts, be it music, theatre and so forth.

As a social thinker, he has made so many social interventions and offered suggestions to the government and other stakeholders of society. Under his social engineering initiatives, he has been able to transform the lives of thousands of youth as the poorest of the poor from the deprived section and the lowest strata of society.

A non-fiction book titled ‘The Living legends of Mithila’ featuring the life sketch 25 of leading personalities of the region was published for their social contributions, in which Dr Birbal Jha has been accorded the status of the ‘Youngest Living Legend of Mithila’.

He is said to be a man of letters as he is well-versed in literature and related scholarly pursuits. For his success and talent in many areas, he is a man for all seasons. He is a man of people for his popularity in the society he comes from. His journey continues.

He is married to Gauri Rani with two Children- Mimansa Jha and Shabdagya Jha. His wife is a Fashion Designer at Pastel India whereas his daughter is a Textile Designer in Bangalore.