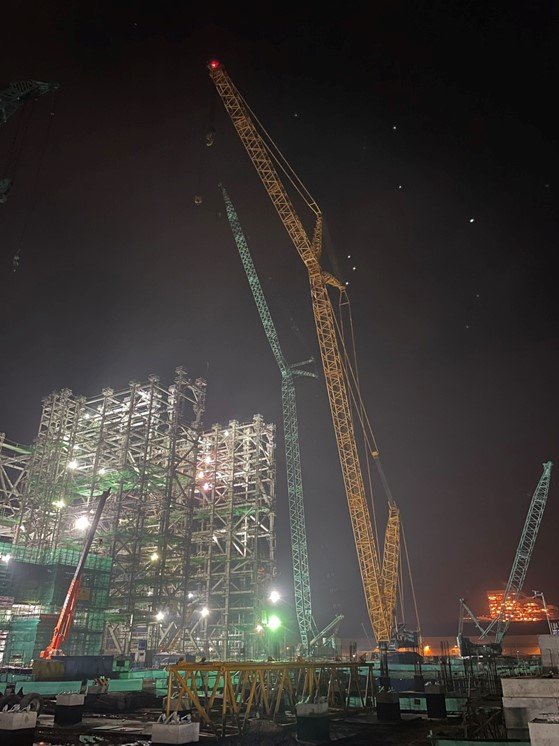 This new plant, the largest in central Vietnam, will have two ultra-supercritical coal-fired generators with a total output of 1330MW and will serve as an energy source for the nearby Formosa Steel Plant in Ha Tinh province.

Lilama, the main constructor of the project, has requested Sarens’ collaboration for the lifting and installation of the two boilers of the plant, with a maximum weight of 77 tons each, using cranes such as the Liebherr LR1750.

The new Vung Ang II thermal power plant, located in Vietnam’s Ha Tinh province, will be of vital importance in supplying power to a country with growing demand, especially in its industrial sector, when it comes on stream in 2024. This plant, which is part of the Vung Ang Thermal Power Centre, is the second complex in the area, and is located next to the Vung Ang I facility, which is already in operation, and close to Formosa Steel Plant.

This new facility, the largest in both size and power generation capacity in central Vietnam, will be equipped with two ultra-supercritical coal-fired generators, considered the most efficient and environmentally friendly in their class, with a total output of 1330MW. Both turbines will be fueled by imported anthracite, hard coal.

For its construction, Lilama, the main contractor, has decided to call on the expertise of Sarens, the world leader in heavy lifting, engineered transport and crane rental, for the transport, lifting and installation of the two boilers of the plant with the heaviest loads (main girders, for example) up to 77 tons at 80m height and in 30m working radius.

Sarens’engineering team will collaborate in the strategic consultancy advice and planning of the works beforehand, as well as facilitating different cranes from its international fleet, including the Liebherr LR1750, one of the most demanded for similar jobs, with a load capacity of up to 750 tons.

The construction of this new plant is part of the government’s “Power Development Master Plan VII”, which envisages that Vietnam will continue to produce approximately 50% of its energy through thermal power plants up to 2030, as a way of meeting the growing demand of a country with more than 100 million inhabitants. The plan calls for at least 83 thermal power plants to produce about 55 GW of electricity to sustain the entire grid.

Vung Ang II is a joint EPC (Engineering, Procurement and Construction) project between Doosan Heavy Industries and Samsung E&C, with a total investment of 2.2 billion US dollars. The first turbine is scheduled to be commissioned in 2024, while the second turbine will be commissioned a year later.

Sarens owns an extensive presence in the construction sector in Vietnam, especially in the development of energy projects. It has recently worked with PTSC M&C on the loading of a 4500T LQUP jacket at its plant in Vung Tau. It has also worked with Trung Nam on the installation of 1200 MW of wind turbines, at locations such as the Trung Nam Wind Farm Phase 2, located in Ninh Thuan Province, or with Siemens Gamesa Renewable Energy to transport and install twelve G114-2.6MW wind turbine generators at the Dam Nai Wind Farm II, among other projects.