ToneTag’s POD 2.0 All Set To Disrupt The Digital Payments Space In India

New Delhi 29 December 2022: ToneTag, India’s largest voice-based commerce, and payments solution provider aims to deploy its ground-breaking technology to resolve digital payment issues faced by micro and small businesses across the country. Through strategic partnerships with major global fintech players, the company is taking steps towards achieving this goal and has already reached and deployed this solution in over 100,000 small businesses and stores across India working with partners like Google, Amazon, ICICI Bank, NSDL, and a few others. 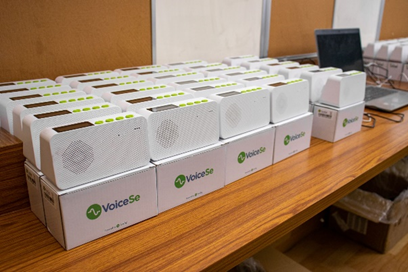 As a proprietary solution to empower the retail ecosystem, POD 2.0 is a robust payment acceptance and engagement device. Its major functions include both accepting digital payments through Unified Payments Interface (UPI), UPI 123Pay and interoperable QR code, and providing instant audio and visual payment acknowledgment.

Although the market today is teeming with payment acceptance devices, what differentiates POD 2.0 from other players is that it is the first device in the industry that is a Voice interactive device and the first device which supports Voice UPI for accepting payments (UPI 123Pay). The reason behind such strong reception rates is that POD 2.0 helps merchants to avail digital payment facilities and be included under the umbrella of complete financial inclusion, no matter the scale of business. Independent of any external infrastructure, POD 2.0 works on secure and sound technology that does not require any other system or technology to function and hence merchants are witnessing a stark rise in accounting efficiency levels.

Besides enabling customers to make safe, no-contact payments, a major advantage of POD 2.0 is regional inclusion. The device functions not only in English but also provides multilingual support in languages such as Hindi, Telugu, Kannada, Tamil, Malayalam, Marathi, Bengali, Odia, Gujarati, and Punjabi. This has further helped merchants from far corners of the country to seamlessly adopt POD 2.0 into their physical stores.

The trailblazing tech powering the device also enables communication of Brands, Banks and other Financial Institutions with merchants and also builds a communication channel between the merchants and walk-in customers for offers and more. Merchants can know the settlement status, any running lending offers provided by banks or NBFC’s by just speaking to the device or by pressing a button on the device.

When clubbed with any billing system, the POD 2.0 can also provide digital bills to customers and actually convert a physical store into a digital store within minutes. In addition to small businesses, global giants, as well as Indian-based banking and finance conglomerates, have adopted POD 2.0 in their systems – together with the partners ToneTag plans to deploy 500,000 POD 2.0 devices in the Indian market in 2023. This only further proves how this device is the best in the business and is here to stay.

Speaking on the success of POD 2.0, Kumar Abhishek, Founder & CEO, ToneTag, said, “In tier 2, 3, and 4 cities of India, the concept of digital payments is not met with the kind of acceptance we witness in metros, and even more so when small merchants themselves do not have the means necessary to enable them. With POD 2.0, we aim at bridging this gap and include all kinds of businesses in our country’s vision to become a completely digital economy. Besides, we have designed POD 2.0 to be both secure and cost-effective, thus hoping to reach even more businesses in every nook and corner of the country.”

ToneTag is an Indian company with a global solution. The company’s solutions have touched the lives of over 52 million consumers and 150k merchants worldwide, and have reached the Middle East, South-East Asia, North America as well as some parts of Africa. They have also entered into collaborations with noted global brands in the payments ecosystem like Amazon Pay, MasterCard, Infosys’ Finacle, ICICI, and First Data along with other banks and wallets.