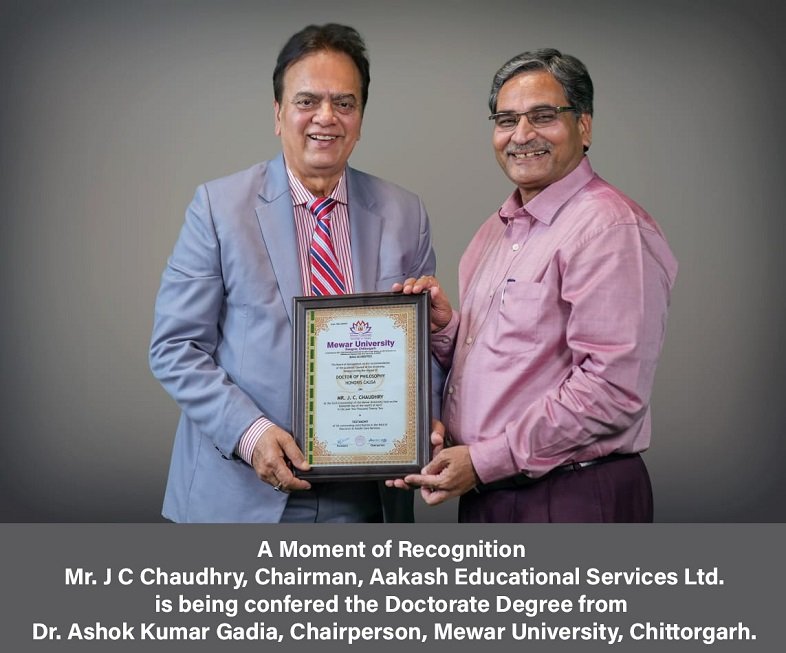 New Delhi, April 25, 2022: Mr J.C. Chaudhry, an eminent educationist, entrepreneur, and numerologist, has been conferred with the Doctor of Philosophy (Honoris Causa) degree at the sixth convocation ceremony of the prestigious Mewar University at Chittorgarh in Rajasthan. The degree has been bestowed for his outstanding contribution to the field of Education and Healthcare services.

Elated at the honour, Mr Chaudhry said, “I am honoured to receive this recognition from Mewar University. It is an acknowledgement of the qualitative improvement we have brought in the education sector over the years. The land of Mewar recalls bravery, courage and determination, and receiving this honour is very special.”

Mr Chaudhry was born in 1949. He started his career as a teacher at Vaish College in Bhiwani, Haryana, in 1972. He has also taught at Hansraj Model School, Punjabi Bagh, New Delhi, and many other schools run by the Delhi Administration. He was one of the first to recognize the need for private coaching for students in India. He started Aakash Institute in 1988. Today the institute has emerged as one of the largest players in the coaching industry in India that provides comprehensive test preparatory services through its distinct verticals with a pan-India network of 275+ centres.

including the prestigious Dr. S. Radhakrishnan Memorial National Teachers Award 2002 for his

services rendered to schools and community. In addition, he has received the Person of the Year Award 2015-16, the World’s Greatest Leaders- India 2015-16 and Life Time Achievement Award in 2017 by Asia One. He was also presented with Global Education Leaders Award 2018 for “Shaping the Dreams of Millions of Medical & Engineering Aspirants”, IEBF Excellence Award 2018 for “Transforming Lives through Education”, Dr. APJ Abdul Kalam Award 2019 for

Excellence in Education, Healthcare, Motivational Speech & Writing, and Global Gandhi Award 2019 for ‘Revolutionizing India with a different league towards Education’ among other notable awards.

Mr Chaudhry has authored two books on numerology ‘Advanced Numerology’, and ‘Practical Numerology’. ‘Advanced Numerology’ is an outcome of his years of experience in numerology and is a must-read for those who wish to know how to plan their future with the help of numbers. Other famous books he authored include ABC of Vastu Shastra; You and Your Gems; Mudra: Healthy Life at Your Fingertips, and Nature: The Best Cure.

Mewar University is an autonomous body promulgated by the Government of Rajasthan. Promoted by the Mewar Education Society (MES) India, it is the first and only university in the Chittorgarh district. The university offers courses in engineering, management and several technical and professional disciplines, besides conventional courses.