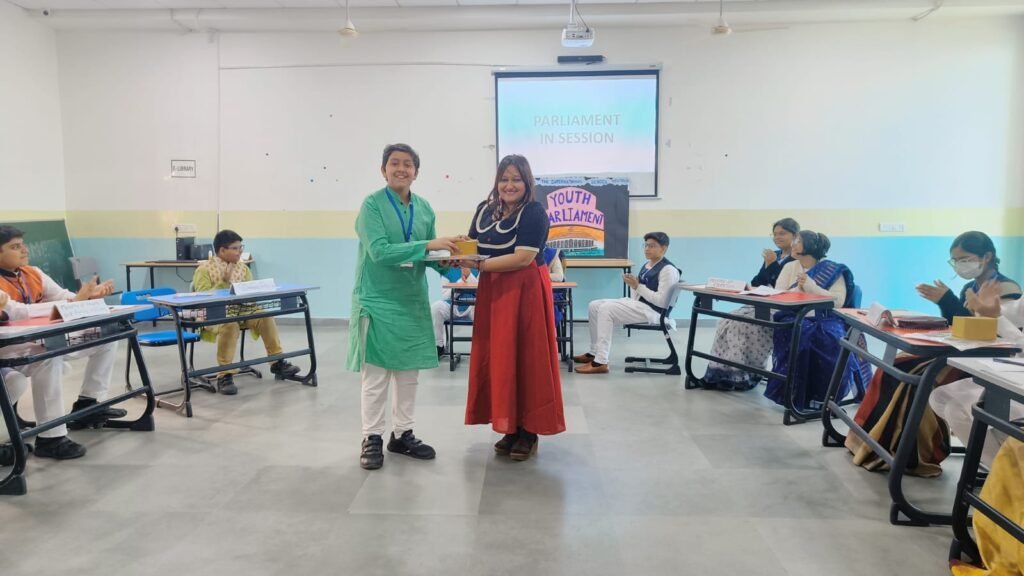 Kolkata, January 16, 2023: On the occasion of Swami Vivekananda’s 161st birthday, which is also known as ‘National Youth Day’, students of Acharya Tulsi Academy Orchids The International School as part of their public speaking curriculum, organized a ‘Mock Parliament’ to teach kids to embrace the spotlight. The mock parliament witnessed children dressed up as eminent personalities from the pre-independence and post-independence eras, including social reformers, freedom fighters, and political leaders discussing and debating on various contemporary topics.

There were two ‘parties’, the ruling party ‘Jai Bharat Dal’ and the opposition party, ‘Aam Samaj Dal’. The topic of the debate was ‘Offline VS Online exams in school’ and ‘If film must be introduced in the school as a mode of education’. Both the teams participated with all vigor, and the contest witnessed some hard-hitting arguments and viewpoints from the students. The school awarded the best speaker and best-dressed leader. Neevan Arora won the best speaker award, and Nishit Kumar Dey, who was dressed as India’s first president Dr. Rajendra Prasad, was awarded as the best-dressed leader.

Sharmili Shah, Principal of Acharya Tulsi Academy Orchids The International School, said, “What can be better than to organize a public speaking event on Swami Vivekananda’s birthday? This event was not only a celebration but also a session of confidence boosting among the students of  Acharya Tulsi Academy Orchids International School. Swamiji believed in the power of words and action. He was the first one to use public speaking to spread brotherhood across the world. ”.

A participant from grade 8, Samridho Banerjee said, “It was great to be part of the mock parliament session. We learned about the various skills of public speaking, such as using hand gestures and emotions and making eye contact through our words.  Post the event, we actually realized that it had boosted our confidence, and now I feel I can speak on any public platform without getting nervous. We were also awarded, which encouraged all of us to participate more in such events.”

Another participant from grade 8, Samiya Mehta said, “On the occasion of National Youth Day, our school organized a Youth Parliament on a very important topic called Online Vs. Offline classes. It was an eye-opening experience with some amazing opinions from different people. We also received awards based on ‘Best Dressed’ and ‘Best Speaker’, which motivated all of us to achieve more.”