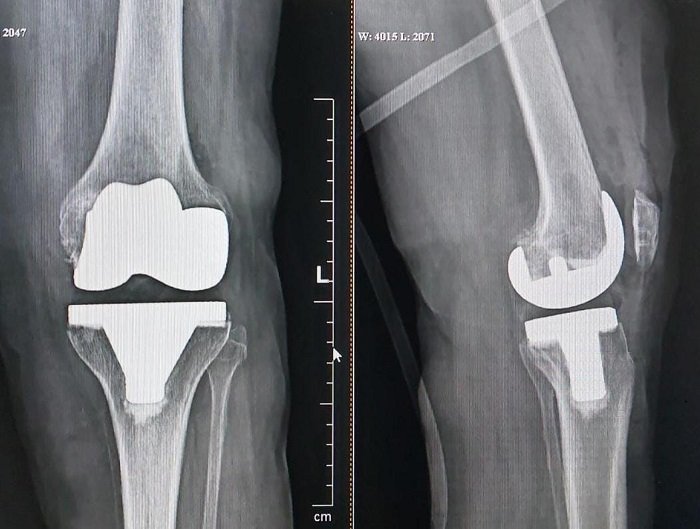 Pushpa Gupta, a 78-year-old resident of Versova, Mumbai. She is Housewife. She was diagnosed with Club Foot but was not well managed. Even in such condition, this woman could walk properly. For the Past 3-4 Year she experienced sudden onset Knee Pain. Slowly, she found it difficult to carry on with her daily activities with ease. As advised by a local doctor, the woman underwent X-rays of both legs. On medical examination, the doctor said that there is wear and tear in both knees. Treatment was started accordingly. But, The pain did not subside even after several remedies & medications. As the pain became unbearable, the family brought her to Zanova Shalby Hospital for treatment.

Dr. Dhananjay Parab, Knee Replacement Surgeon, Zynova Shalby Hospital, Mumbai Said, ‘‘The woman could not walk due to severe pain and deformity in both her knees. In the medical report, it has been seen that the knee of the left leg of this woman has been damaged. In such a situation knee replacement surgery was the only option. In this regard, the surgery was performed with the permission of the family. The woman was able to stand on her feet again just hours after the surgery. Two days after the surgery, the woman was discharged.’’

Dr. Parab added, ‘‘The woman was born with club foot, however it was not treated well, leading to a deformed foot. In such a situation, the problem of arthritis arises in the future. She had knee problems comparatively early due to club foot. Apart from this, the woman was suffering from diabetes and high blood pressure. Under such conditions, doing knee replacement surgery was a challenge. Yet, In this scenario doctors performed a successful knee replacement surgery.

‘‘For the last 3-4 years I was suffering from knee pain. Even simple day-to-day tasks such as walking, sitting, sleeping or standing up were difficult for me. I thought I will never be able to stand on my feet again. But, Doctor Assured that, after this surgery the pain would reduce permanently. I thank the doctor for helping me to move freely again.’’ Concluded Patient Pushpa Gupta.

Dr. Shabab Alam honored for his remarkable contribution in the field of First Aid

FOS: A Fibre for a happy and healthy baby