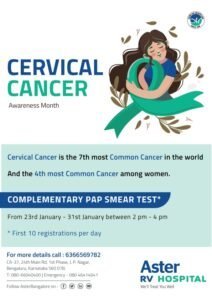 Cervical cancer usually takes many years to develop into an invasive disease and the mortality rate is low when it is detected in early stages. With the discovery of HPV infections and prophylactic vaccinations, it is now possible to prevent cervical cancer in much earlier stages.

Speaking on the need to create awareness on Cervical Cancer in women Dr. Sunil Eshwar, Lead Consultant – Laparoscopic Surgeon said, “Recent studies show that screening of cervical cancer reduces the disease incidence and disease mortality by 50%. Cervical Cancers can be prevented at the earliest by detecting the presence of HPV. Regular population-based Screening is done using Pap smear cytology and it is accepted as the international screening Programmed. PAP smear screening helps in detecting the precancerous stages such as Low-grade intraepithelial neoplasia, High grade Squamous intraepithelial neoplasia prevents from Cervical Cancer.”

A Pap smear, also called a Pap test, is a screening procedure for cervical cancer. It tests for the presence of precancerous or cancerous cells on your cervix. The cervix is the opening of the uterus. During the routine procedure, cells from your cervix are gently scraped away and examined for abnormal growth. Pap tests are very accurate. Regular Pap screenings reduce cervical cancer rates and mortality by at least 80 percent.