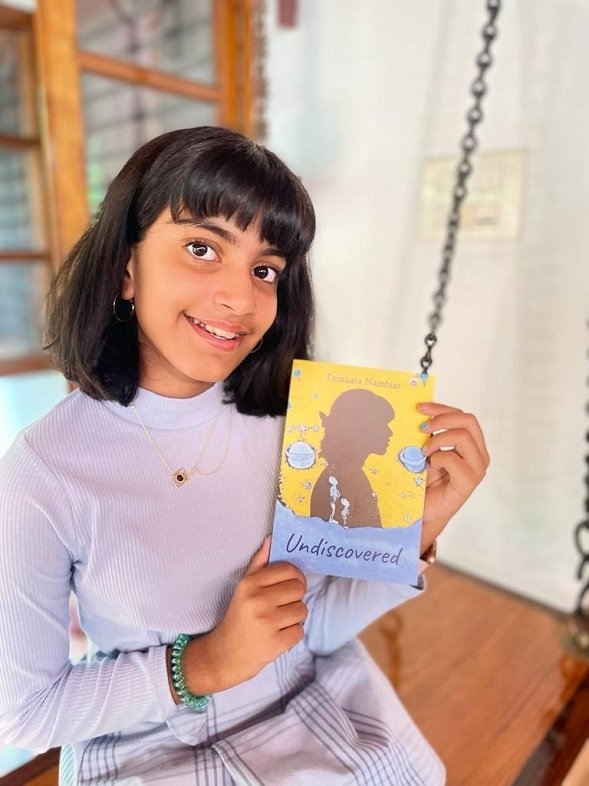 Hyderabad, January 2023: Tamaara Nambiar, one of the youngest poets in India, launched her new book, titled ’Undiscovered,’ today. The book is published by a reputed publishing house, Authorspressgroup, which brings out creative and scholarly books.

The book is a collection of 38 poems that she began writing when she was five years old. Through the book, the author gives a glimpse of the stages of life and talks about death, birth, and her sense of awe about the mysterious cosmos and elements of the earth like fire and water.

Prominent author Shashi Tharoor lauded the efforts of the young poet in crystallising her thoughts in her poems. He said, “The poems cover a wide range of themes and styles, from existential questions to the joys of a moonlit night.” He wished her a bright future.

The illustrations in the book were also drawn by her and show her imaginative spark. The designs were etched on a Zinc plate by Tamaara using a sharp tool and printed by eminent artist K. Laxmagoud. The book is available on Amazon

The launch ceremony was held at Shrishti art Gallery on 7 January, Saturday, where Dr Jonathan Long, head of Aga Khan Academy, graced the event and unveiled the book.

Further, she has written a book of short stories and is waiting to get it published and launched later in the year. She composed a song from one of the poems that she read at the book launch event.

The young author aspires to be a song writer.  Very soon, Tamara will go live with her on YouTube Channel as well as a website and continue sharing her new work with poem lovers.

Bhaskar Ghose, former Secretary, Ministry of Information and Broadcasting, and a former Director General of Doordarshan, said, “Tamaara’s poems reveal an unusual sensitivity to her surroundings, events, passion and awareness that I have not seen in anyone so young. These qualities are evident to me in her poems about nature and human behaviour. Undoubtedly, she will become one of our finest poets.”

A few eminent personalities that attended the event were Lakshmi Manchu, an actress; Manoj Manchu an actor and Siddu, an actor.