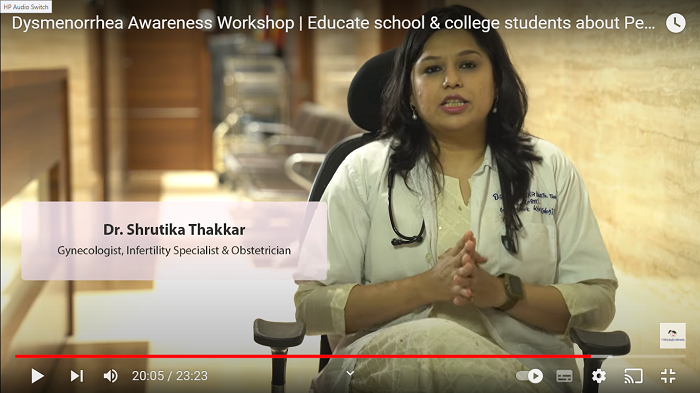 Because there is a massive lack of awareness about the condition and the factors that cause it, millions of women and young girls continue to suffer silently. An estimated 68% of girls miss school every month, and over 60% cannot participate in sports due to dysmenorrhea. About 77% of young girls cannot perform household chores due to this problem. The challenge is not just with younger girls but also hits the corporate workforce in a big way since 50% of the women employees are forced to go absent from work due to this problem.

To help them overcome this lack of information and dispel myths about periods in 2018, C Com Digital initiated the campaign #WhySufferSilently for Bluecross Laboratories Pvt Ltd. The campaign has seen growth steadily over four years. In 2018 they took Helly shah, a young slam poet, to colleges in Mumbai and conveyed the message poetically. In 2019 the campaign was called “Break the cheat chain,” and they used multi-lingual and exciting music videos to run in colleges and various medical facilities. “Break the cheat chain” was trending at #4 on Twitter and garnered 79,44,724 impressions reaching 31,64,051 unique users. This successful campaign got one hundred-plus college participants and more than five hundred requests from various places to conduct workshops on dysmenorrhea. These requests have come from more than sixty cities across three states. Also, around 200 NGOs and corporates expressed interest in participating in the Dysmenorrhea campaign. In 2020 & 2021, during the pandemic, the campaign went purely digital.

In 2022, a video of an easy-to-understand Dysmenorrhea Awareness Workshop was created, where a gynaecologist explained Dysmenorrhea, Period cycles, and Period Pain  with simple animations. In this video, a young girl explains dysmenorrhea facts, myths, and
taboos and how to address them. This campaign has received an excellent response, and nearly 130 workshops were undertaken in less than a month; the campaign of 2022 has just begun. There have been fantastic queries and responses from corporates and NGOs. The team is optimistic about breaking all old records through Dysmenorrhoea Awareness Workshops across India.

Elaborating on the continued efforts through the campaign, Chandan Bagwe, Founder/Director, C Com Digital, said, “We took up this cause of driving awareness against Dysmenorrhea for Bluecross in the year 2018. It is a problem that hundreds of millions of women suffer in silence due to a lack of awareness. Over the last four years, our dedicated efforts have created a platform for change. Even when the pandemic waves forced lockdowns, we kept the campaign running through our digital outreach on social media and creating various videos to spread information. Each year, the campaign has been growing in strength and impact. We now hope that as the campaign completes four years, it will make an even greater impact in the coming times.”

Adding further, an Official Spokesperson, Blue Cross Laboratories Pvt. Ltd., said, “Bluecross Laboratories has been committed to the cause of spreading awareness about Dysmenorrhea (painful periods) and since 2018. Our Brief was simple to create awareness around Dysmenorrhea, as we saw the increasing population of young women suffering. C Com Digital understood the brief well, and they came up with exciting ideas and strategies to raise awareness. We are committed to such social causes and will continue to do so.”

Over the years, the campaign has emerged as a multi-dimensional effort comprising workshops, corporate events, online awareness campaigns, and even slam poetry by YouTuber Helly Shah, who had gone viral throughout India with her poetry on why period pain is not normal. The campaign has also featured awareness drives in colleges and driven engagement through interactive efforts. As one of the best-integrated campaigns in the medical awareness segment, it has already garnered an audience of over 14 million with 2.1 million YouTube views, over 50,000 website views, and 10,000+ email views. It has added more than 1.2 lakh Facebook followers and consistently high visibility on Twitter, Instagram, and in regional and national media.